This was supposed to be the year. After nearly a decade of planning, NASA astronauts would fly to space on launch systems built by a commercial company hired to do the job the space agency no longer could, not after the Space Shuttle program ended. For years, the United States had paid Russia to send its spacefarers to the International Space Station. Now the country would do it on its own again, from its own launchpads.

This probably isn’t going to be that year.

The effort, known as Commercial Crew, is behind schedule, slowed by a mix of funding shortfalls, technical challenges, safety concerns, and other factors. NASA might have to buy more seats on Russia’s Soyuz system to make up for the lag. SpaceX and Boeing, the companies in this effort, have certainly made significant progress. In March, SpaceX’s astronaut capsule, carrying a mannequin in a spacesuit, flew a seemingly flawless mission to the space station and back. The mood was buoyant, and Elon Musk and Jim Bridenstine, the NASA administrator, were all smiles as they toured the launchpad in Florida in hard hats.

But barely two months later, the same capsule exploded during a test on the ground. And over the past few days, Musk and Bridenstine have been embroiled in a tense public exchange about the progress of their shared effort.

As Musk prepared this weekend to unveil the latest details about SpaceX’s Starship, a solo effort intended to send people to the moon and Mars, Bridenstine tweeted: “NASA expects to see the same level of enthusiasm focused on the investments of the American taxpayer.” Musk responded by saying that most of SpaceX’s resources go toward the Commercial Crew program and that the company is going “as fast as we can.” He even joked about NASA’s own effort to build a rocket to reach the moon, which is also years behind schedule.

SpaceX Has Starry-Eyed Ambitions for Its Starship

The Messy Consequences of the Golden State Killer Case

It’s practically in the job description for NASA administrators to tell contractors to meet deadlines, but the public back-and-forth felt unprecedented; how many contractors also have a Mars spaceship project on the side?

I spoke with Bridenstine today about the Commercial Crew program. The conversation has been lightly edited for length and clarity.

Marina Koren: Did you watch Elon’s presentation this weekend?

Jim Bridestine: I did, yes.

Koren: What did you think?

Bridenstine: I thought it was awesome. I think it was inspirational. I like it when contractors get people enthused and inspired about space exploration, and I was inspired myself.

Bridenstine: We are working really hard as an agency to get to a day where when we announce a cost and schedule, we can have credibility. Our contractors have to be as committed to that as we are. I was getting a lot of calls from the media about this event, and so we just sent a tweet and said, look, we look forward to this, this is exciting, but at the same time we expect our contractors to be as committed to the programs that the American taxpayer has invested in.

Koren: Both SpaceX and Boeing are behind schedule on Commercial Crew. You told CNN last night that Starliner’s flight is still months away. Why single out SpaceX?

Bridenstine: I don’t. I’ve been critical of all contractors that overpromise and underdeliver. We are not singling out anybody.

Koren: After the big presentation on Saturday, a reporter asked Elon to respond to your tweet. Elon said, “Did he say Commercial Crew or SLS?” [SLS stands for the Space Launch System, the NASA capsule and rocket that is meant to deliver astronauts to the moon.] What do you make of that?

Bridenstine: Well, I don’t think that’s helpful. Commercial Crew is about getting to low-Earth orbit. We are spending $85 million every time we have to buy a Russian Soyuz seat to get to the International Space Station.

SLS, that’s a whole different mission. SLS is going to the moon. So I don’t know why you would compare the two. But certainly SLS is behind schedule and over cost. We want them to get back on cost and schedule as well. We are holding them accountable just as much as anybody else.

Koren: Have you thought about a future in which private companies leapfrog NASA in the effort to go to the moon?

Bridenstine: I think it would be fantastic if they could do that.

Read: The unique friendship between astronauts

Koren: And what if they’ve done that before SLS is ready?

Bridenstine: I’m for that. And if they can get to the moon, we want to use those services. Our goal is to be a customer, not the owner and operator of all the equipment. But right now, if we’re going to get to the moon in 2024 with humans, SLS and Orion are the way to do it.

Koren: Musk said this weekend that SpaceX would be ready to fly NASA astronauts within three to four months. Does that sound realistic to you?

Bridenstine: No. They have redesigned their launch-abort system, and with that redesign, [the system] has to be qualified. We are lucky that the explosion happened … during a test. If that wouldn’t have happened, we would be taking a lot more risk that we would not be aware of right now. But now that we have a new design, it needs to be tested; it needs to be qualified.

Koren: When could you see NASA astronauts flying?

Bridenstine: This is a discussion that we need to agree on between NASA and SpaceX. So I don’t want to preempt SpaceX and what their timeline is, but certainly “three to four months” I don’t think is realistic.

Koren: Last year, you ordered reviews of SpaceX and Boeing that would evaluate, in part, the culture of their workplaces, to, as you put it, “show the American public that when we put an astronaut on a rocket, they’ll be safe.” What’s the status of those?

Read: NASA administrator on Elon Musk: ‘That was not appropriate behavior’

Bridenstine: They are under way as we speak. And when they are completed, we’ll be happy to share, but it’s going well. Everybody’s being very cooperative. At this point, it looks like everybody is in good shape.

Koren: I’m wondering how you would describe your professional relationship with Elon at the moment. I remember right before Crew Dragon took off and went on to what would be a successful mission to the ISS, you toured the launchpad, you posed for selfies; it was obviously a pretty exciting time. Where are you at now?

Bridenstine: I think Elon is an amazing person, and I’m still a big fan. I want him to be successful. I want to make sure that the partnership is strong, so I think our relationship is good. We’ve got hard work in front of us, and we need to get focused on that. 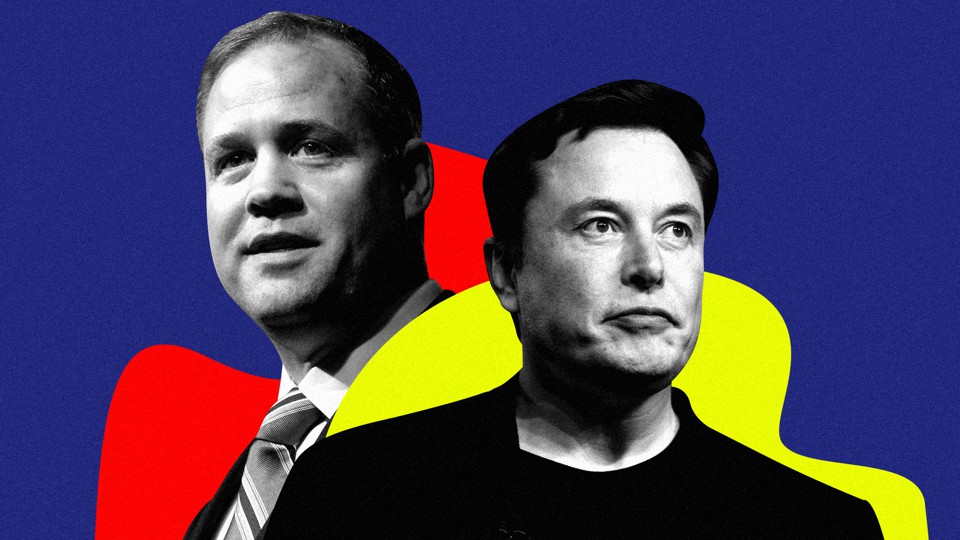