When I think of museum specimens, I think of the American Museum of Natural History, where dim hallways smell like time passing and wolves bound over moonlit snow. I think of the delicious thrill of comparing my size with a lion’s and of the difficulty I have remembering, sometimes, that these creatures would be infinitely more impressive if they weren’t behind glass and dead. That these dioramas are a shadow of the natural world.

The animals in these displays represent a tiny fraction of the animals that natural-history museums keep in their collections. Trina Roberts, who oversees collections at the Natural History Museum of Los Angeles County, estimates that only about 1 to 5 percent of a museum’s catalog is typically on display; most specimens in its research collections are preserved and stored differently, and are never seen by the public. AMNH has more than 400,000 specimens of fossilized mammals in its stores, and about 280,000 of species that still roam the planet. This bounty, in turn, represents only a fraction of the Earth’s multiplicity of species.

Curators know well that these repositories are not perfect representations of nature. And a new study, published last week in the Proceedings of the National Academy of Sciences, pointed out one more way that mammal collections, in particular, don’t quite match the catalog of life on Earth: Most of the animals in them are male.

The study calculated the sex ratios in two types of collections–museum collections of modern mammals, which were gathered over the past few centuries, and a set of hundreds of brown-bear and bison fossils from the Pleistocene. For the modern mammals, the research team, led by Graham Gower of the University of Copenhagen, pulled sex counts from the collections databases of four major museums: the AMNH, the Smithsonian’s National Museum of Natural History, London’s Natural History Museum, and the Royal Ontario Museum. The specimens had all been sexed by their genitalia or by other distinguishing sex-specific features, such as antlers. Of the 19 mammalian orders included in the study, only Chiroptera (bats) and Pilosa (anteaters and sloths) were female-biased. Collections of hoofed mammals, armadillos, and the relatives of Tasmanian devils were all especially male-favored.

For the Pleistocene bears and bison, Gower’s team used bones it collected in the field and borrowed from museums to look for biases. Because no genitalia were left to inspect, the researchers turned to the animals’ DNA for clues to their sex, and found that 74 percent of the bison and 64 percent of the bears were male. Hayley Lanier, an assistant curator of mammalogy at the University of Oklahoma’s Sam Noble Museum who was not involved in the new study, calls the work “really cutting-edge,” and says that the lab led by the study’s senior author, Alan Cooper, has a reputation for “eye-opening” research. (Cooper was suspended from his position at the Australian Centre for Ancient DNA in August over allegations of bullying and harassment.)

Bias in museum specimens is nothing new. “For people who work in this field, it is certainly well known that what species we have in collections are biased,” Roberts, of the Los Angeles museum, says. That’s partially because humans are more likely to notice bigger animals, or their remains, than microscopic ones. We are more likely to pick up a specimen from the beach than the bottom of the ocean. Meanwhile, the processes that determine which animals get preserved over thousands or millions of years–who fell in a tar pit, who was buried by snow before the scavengers arrived, whose bones happened not to be pulverized by a moving glacier–can give certain individuals an arbitrary advantage that they didn’t have in life.

But such a widespread sex bias is an unexpected twist. Gower says it was “a huge surprise” to see such extreme biases in the data, because living mammals’ birth rates tend to be more or less perfectly sex-balanced. And, as Lanier puts it, “you’re equally likely to die whether you’re male or female, because everything dies.” Gower and his colleagues tested a few possible explanations for the Pleistocene male bias, and ultimately argue in their paper that behavioral differences are the answer. In many mammal species, males tend to have wider ranges and are more likely to live alone, which means there are more possible places a male could die. If you’re a paleontologist excavating a slice of 12,000-year-old rock, by this theory, you’d be more likely to come across a wandering male than a homebody female.

Sex-specific behavior is still likely to bias collections of modern mammals, but the team thinks that factor is eclipsed by the quirks of the ways humans collect dead animals. Lots of research specimens are donated to museums by hunters, who tend to target males because they’re larger and have flashy features like horns and manes, and because it’s less morally icky than killing a mother who might be caring for young. Even animals trapped expressly for research can end up with a lopsided sex ratio, often for conservation reasons: Lanier says, for example, that the state of Oklahoma recently asked her and her colleagues to collect as few female bats as possible for a project, and preferentially take the males.

For curators, the upshot of the new paper isn’t so much the why of the sex bias, but the what now? Gower, Lanier, and Roberts all point out that the relative scarcity of female research specimens could lead scientists to draw skewed conclusions about a species. Studying a male-heavy sample as if it’s representative of a whole species could erase sex differences in diet, size, behavior, and individual animals’ responses to changing habitats. “I think some of this bias actually speaks to a larger issue that we’ve also seen in medical science, which is that we tend to select one sex” as the default model of how a body works, Lanier says. “And I think that those biases really leave us with an incomplete understanding of how the world works.”

[Read: The doctor doesn’t listen to her. But the media is starting to.]

Lanier even speculates that the sex bias in Pleistocene samples could affect one of our most fundamental ideas about the era: that after it ended, giant mammals gave way to regular-size ones. In mammals, males tend to be larger than females, and that dimorphism becomes more extreme the larger a species gets. If three-quarters of the bones paleontologists collect from Pleistocene bison are male, they’ll end up estimating an average size that would have been larger than the actual average during the Ice Age–when, presumably, 50 percent of bison were female–and unintentionally inflating the size difference between 12,000-year-old bison and modern ones.

To capture a more accurate picture of nature, Roberts says, museum curators have to keep growing their collections. “If what museums are trying to do is create a better and more complete archive of biodiversity on Earth, and we know biases exist like the one this paper is pointing out,” she says, “it’s important that we continue to collect.”

More collecting runs up against an obvious concern in a world where species both beloved and crucial to their ecosystems are fading out of existence: How many animals, exactly, is too many to remove from their natural populations? According to Lanier, museum collecting of small mammals usually doesn’t hurt their populations, and larger ones are almost always collected in partnership with hunters, or as salvaged roadkill. Still, as of last year, there are nearly 6,500 recognized mammal species on Earth, and countless more extinct ones. Out in the world, there are okapi stretching to reach the tenderest leaves, harvest mice skittering along flower stems, water buffalo roaming through grassy swamps. Museums can make their stores as balanced as possible, but they can only ever contain a static slice of the spectacle outside. 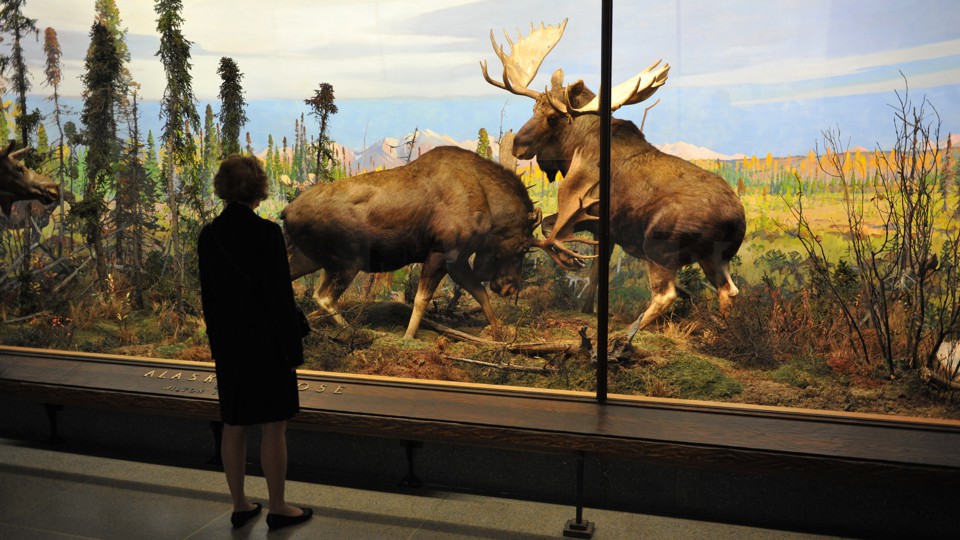